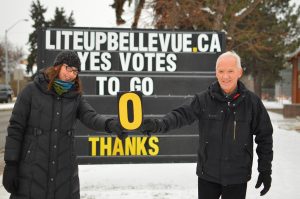 Thanks to Jeannette and Joe for leading efforts to capture the “Yes” votes!

After initiating and planning the process, two Bellevue residents formed and led a team of several determined volunteers who conducted a door-to- door campaign, knowing that other neighbourhoods interested in decorative lights were unsuccessful without the extra effort to “get out the vote.”

The team needed 271 YES votes by November 15, 2017, to make the decorative street lights a reality.

The team surpassed the target with time to spare, acquiring 295 YES votes: 86% of voting property owners were in favour of decorative street lights.

The team discovered much more than the neighbourhood residents’ common desire to enhance the physical appeal of their quiet river valley location. What they discovered was the Spirit of Bellevue Community!

The team enjoyed meeting neighbours at their doors and through the process the committee was encouraged by the following:

✔ Bellevue is in demand: There were for sale signs going up and down more quickly than the team could connect with owners to vote; young families are becoming much more prevalent; and many existing homes being upgraded and restored to their original character.

✔ Pockets of community: We found vibrant blocks of connected neighbours. Most touching was on a couple blocks we visited that included many younger families and a senior resident who, in her last days of failing health, insisted on voting for the decorative street lights to support, in her view, the much-needed betterment of the community.

✔ Non-owner- occupied property support: Many existing property owner residents also own other properties in Bellevue. An unexpectedly high 38% of the 101 owners (living both inside and outside of Bellevue Community) who owned properties in which they did not reside voted to support the decorative street lights. The result was exceptional because privacy laws prevented the team from directly contacting most of these owners. Some of these votes came in from out of town, and even out of the country!

The Bellevue Decorative Street Light Committee is grateful to the Bellevue Community League for allowing the voting status to be posted on the sign outside the community hall and for helping to post information about the initiative on the league’s website. The committee is also very grateful to the spunky team of volunteers (ages 5-70!) who went door-to- door to provide information and promote the street light improvement.

The City will formally communicate with all property owners regarding the next steps of the neighbourhood renewal project, which includes a property assessment being issued early in 2018 to reflect the levies for decorative street lights and sidewalk renewal. An open house should follow shortly thereafter to discuss the construction plans for 2018 and 2019. The Bellevue website will be updated as information becomes available.

The Bellevue Decorative Street Light Committee can continue to be contacted at:
BellevueStLights@gmail.com